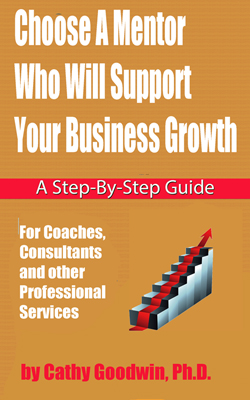 So you're looking for help to grow your business ... and wondering if you should hire a mentor?

With the right mentor you could avoid the most common, most costly mistakes and detours. You'll earn more than you ever anticipated.

But let's face it... good mentors don't come cheap. The price of a mistake will be very high.

You'll find lots of mentors out there, eager to help...for a price. But which one will be best for you? This Report will guide you through the process of choosing the mentor who is most likely to help you grow your business (and avoid those who will drain your bank account and leave you stranded).

Working with the wrong mentor will cost much more than the fees you pay.

I decided to write this Report after someone told me about a well-known coach I'd admired. A former professional, she'd built up a million dollar business, preparing to live happily ever. Despite spending hundreds of thousands of dollar on mentors, she had declared bankruptcy. She now lived in an apartment with roommates.

She's not alone. When it comes to hiring coaches, most of us have made at least one mistake. The reason many business owners choose the wrong mentor is not a lack of intelligence, it’s not lack of character, and it’s not even a lack of business savvy.

The reason many people never find success with a mentor is that they haven't been given the information to make a wise choice. It's a unique kind of business decision and few people are willing to talk openly about their experiences.

In this short ebook you will discover...

... the 4-point test to see what kind of mentor you need for your business

... 3 reasons some people benefit dramatically from hiring a mentor (while others pay a fortune and keep struggling)

... 2 significant benefits of hiring a "famous" mentor (and how to avd paying for "guru glow")

... the 9 questions you MUST ask a mentor before you turn over your credit card (keep it handy so you won’t forget the most important one)

...how not to get fooled by testimonials and references (and spot the good ones)?

... how to get the most value from your mentor after you’ve signed up (and avoid the most likely pitfall...

Bonus #1 - Template: The referral letter template that will help you get clients before you hire a mentor

Bonus #2 - Tip Sheet: How to chose a target market

Bonus #3 - Worksheet: Are you ready to start a coaching (or other professional service) business

What's it worth to save thousands of dollars - and get access to resources that can help you earn more?

When you choose the wrong mentor, you lose more than the mentor's fees. You miss out the the revenue you would earn if you'd worked with a different resource - or even on your own.

I'm not aware of other Reports offering this information, but I've been told that $97 would be an amazing deal. Instead, you can enjoy the introductory price of $9.99.

A Word From The Author

I'm Cathy Goodwin. I've been on the Internet in my own business for over a decade. I've hired and fired mentors. I've given glowing testimonials to some and asked for my money back from others.

As a copywriter, I learn a lot about mentors.

... I've worked with some top marketing coaches on their sales letters and worked with their clients as copy coaches.

... I've helped some of my clients build on the success they achieved with a well-chosen mentor -- and helped others recover from a business-busting, soul-destroying experience with a disastrous mentor.

You can avoid the most common mistakes.

This Report will help you make wise decisions about choosing from a long list of mentors...or choosing no mentor at all because you're not ready for one. You'll not only make a lot more money: you'll save countless amounts of money, hassle and heartache.